On Saturday Kevin and I started watching Silicon Valley. Silicon Valley is a show created by Mike Judge about some programmers who invented a “multi-platform technology based on a proprietary universal compression algorithm that has consistently fielded high Weisman Scores ™ that are not merely competitive, but approach the theoretical limit of lossless comprehension.”

They’re on the verge of making it big but forced to do battle against an investor they turned down. The scorned investor created a competitive product called Nucleus by reverse engineering the prototype compression algorithm given to him. ¹ The investor behind Nucleus comes out swinging pre-Nucleus release advertising “If we can make your audio and video files smaller we can make cancer smaller…and hunger…and AIDS…”

The most recent episode Kevin and I watched, Articles of Incorporation, centered on a trademark issue.

The name of both the technology company and compression algorithm product is Pied Piper. 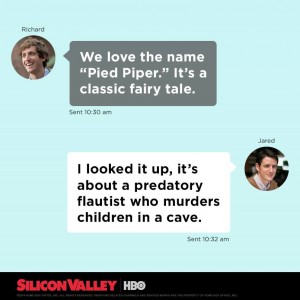 Richard, CEO of Pied Piper, stumbles across Pied Piper Irrigation in attempting to incorporate his company. Richard and his coworkers believe this is a conflict. Richard is determined to hang onto the Pied Piper name and heads off to negotiate with the irrigation company owner. 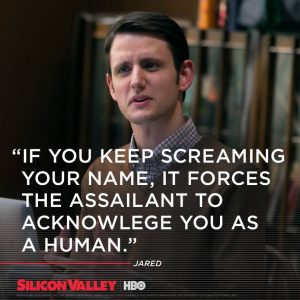 In the meantime Erlich, Senior Minority Owner/ Chief Executive of Physical Space (Landlord), heads off to come up with a new name by embarking on a “vision quest” which involves taking some hallucinogens while locked in a gas station bathroom.  I very much wanted to share a clip of the vision quest I found but I find it hard to believe the person had the rights to share the clip. As this is a blog that respects copyrights you’ll just have to imagine this guy Erlich sitting in a desert field while tech company logos swarm around him as he shouts out buzzwords like “cloud” a lot.

In the end Richard winds up paying Pied Piper Irrigation $1,000 for the name and Erlich’s vision quest is fruitless.

Here is the thing. Pied Piper Irrigation and Piped Piper the technology company are in completely different markets. One company makes sprinklers and the other makes software. There was no conflict. No need for the vision quest and no need to shell out 1K.

Below is a preview of the Articles of Incorporation episode if you’re interested in seeing a bit of the show. This is an HBO show, so as you would expect there is mild profanity in the clip and one of the funniest parts on how to choose your name leans towards being NSFW so I am not summarizing it here. This blog is both respectful of copyrights and PG rated!

These are couple of guidelines, besides perhaps not choosing a name that could be associated with a “predatory flautist who murders kids in a cave” as your mark, on how to choose your trademark.

Rule Number 1: Pick something unique!  If it’s not unique don’t pick anything confusingly similar to another company’s name or product if it crosses into your line of business.  I do understand confusingly similar is subjective and that in business rarely is any decision going to be risk free. It is about knowing what level of risk you’re willing to take and figuring out what you need to make it happen.  So if you’re Richard and believe the two marks are confusingly similar (even though in the show they are NOT) you might want to negotiate to have the trademark transferred to you or more likely work out a coexistence agreement so you can both use the respective marks bounded by either geography or market.  Or, if it is really worth it, file an opposition or cancellation action if you can. But this doesn’t come cheap and you should get legal help in this situation.

Rule Number 2: Nothing descriptive. Never ever pick a trademark that is descriptive of what the product does or is. This will cause problems when you try to register. One mark that I think toes the line is the 16 handles logo of the frozen yogurt shop chain. The shop has 16 handles dispensing frozen yogurt. But they got the mark registered.  You can get a descriptive mark registered when the mark has been around long enough to acquire a secondary meaning. This means consumers primarily associate the mark with the manufacturer (you) rather than the underlying product. I don’t think 16 Handles® has been around long enough to have secondary meaning though. An example of a descriptive mark that has acquired secondary meaning is Best Buy®.

Rule Number 3: Try to pick something fanciful. A fanciful trademark is a word that is invented, something not found in the dictionary. This is the strongest mark you can have, meaning the most easily protected, because it is entirely unique to you. Some examples of fanciful marks are Exxon® and Kodak®.  My favorite fanciful mark is the name of the company I work for. No bias here it really is :). Our founder was chatting with a friend and the friend asked, “What’s a paradigium?” Meaning paradigm.  Our founder shortened the word to just digium and Digium® the company name was born.

Rule Number 4:  If you can’t go fanciful go arbitrary. This means picking an existing word not previously associated with that line of goods. An example of this is the Apple® mark for computers and Comet® for cleanser.

Rule Number 5: If you can’t go arbitrary go suggestive. This means picking a mark that suggests the nature of a product but it requires some thinking to connect the dots. An example of a suggestive mark is Coppertone® sunscreen.

Rule Number 6: You can’t go generic. A generic word is a word that is the name of the class to which your product/service belongs.  This should be obvious but…. if you make a software product don’t call it Software. If you operate a pet store don’t call it “Pet Store”.  Adding in the geography so it reads “Westport Pet Store” doesn’t make it any better. It’s now both descriptive and generic.

I know it’s tough to pick a unique trademark that is likeable. Watching Silicone Valley I had empathy for the guys throwing out new names for their compression algorithm company like “Smushit,  SMLLR, Kontraktor, Wane Maker, Make it Wane, and Diminisher.” I hear you. But you came up with a novel innovative product and it deserves a unique name, not someone else’s name!

So you’ve picked your mark using these guidelines and now you need to learn if there is someone out there in the geography you plan to distribute product and/or in the same market space with a confusingly similar mark.

Search social media such as LinkedIn, Facebook, Twitter, etc. Type the word in your Internet browser and see what pops up. Phone books are old school but in case someone with a similar mark hasn’t gotten with the times yet check there. Ask around in your industry to check if someone else has heard of a similar mark. It is better to find out early in the process then finding out through a cease and desist.

If you’re staying within the state search the Secretary of State records and municipal records. Sometimes you can access these records for free; otherwise it’s usually a nominal fee.

If your product distribution is going to cross state lines search the USPTO. This is free. Go to www.uspto.gov and click search trademarks.

Follow these tips and if you do turn up a conflicting mark and can’t find a way to move forward with your targeted name, things will be okay. Nobody needs to go on a vision quest.  You’ll pick something great and able to be trademarked.

¹ The programmers must have thought evaluation agreements and NDAs were for sissies. They learned the hard way.