Today was the first time I used a sports nutrition gel.

Last week I realized I had a long run of 15 miles coming up and it was time to think about nutrition to bring with me. A poll of my friends showed most used sports gels, with the winner being GU Energy Gel.  A friend told me the smart thing to do would be to buy a few samples from a local running store to figure out what gel I liked best before committing to a box full of them. However, between work and things going on related to my move I knew there was no way I’d find time to go to the running store and so it was either order a box from Amazon or nothing.  The gels come in caffeinated and non-caffeinated. I’d seen warnings that caffeinated gels upset some runners’ stomachs but wasn’t terribly concerned because I figured my stomach is cast iron from all the coffee I drink.  A cup of coffee has around 95 mg caffeine, a GU Energy Gel around 20.

Rather than spend time figuring out the nutritional differences between the gels I went with the better method and chose the flavor I thought would be best in gel form, Vanilla Bean. 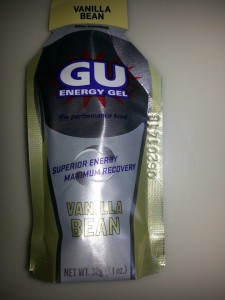 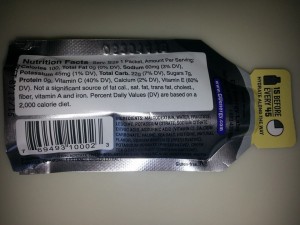 The ingredient list is kind of hard to read on the pouch so here’s a shot of the list as it appears on the box. 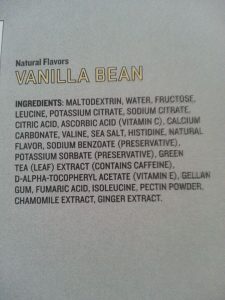 The box suggested I use the GU every 45 minutes, with one 15 minutes before starting. A quick check of other runners’ reviews showed most agreed with what I thought, that this was nuts.  Instead I planned to stop and eat a GU every six miles, washed down with water.

The GU packets were easy to tear open and easy to squeeze the GU out. The best way I can describe the Vanilla Bean GU is like warm vanilla pudding made with too much artificial sweetener. It left an aftertaste in my mouth and washing it down with water did not get rid of the aftertaste. That said it wasn’t an awful flavor and there is only so much you can do to flavor a GU I suppose.

I stopped and ate a packet at mile 6 and not five minutes later my stomach rebelled.  Fortunately, a friend told me to plan my inaugural GU route so I’d run past bathrooms and I had heeded her advice. I felt decent afterwards and made it to mile 12 no problem. I stopped and had another packet.  Almost immediately after that my stomach was in knots and I was racing to the restroom again.  The last 3 miles I was running slooowly because my stomach was rough, but I managed to jog those last few miles. I was sweating bullets though.

Mercifully I made it home without further stops and posted on Facebook the 15 miles and that it was my first outing with GU. Right away a buddy asked how my stomach held up. And I let him know what was what. A few friends replied to say they had similar problems the first time they used the GU gels also and suggested that next time I have the gel slowly instead of all at once to avoid the shock to my system. Next weekend I plan to have a half a packet every 3 miles instead of an entire packet every 6 miles. I know it couldn’t have been the caffeine and I’d be surprised if it was the sugar since I have a bucket of Pez candy I dip into with no problem. But clearly something in the gel is made for taking slowly.

The gel definitely made a positive difference in recovery. Normally when I get home after a long run it’s a little difficult to get up the stairs because my legs are tight and sore and I immediately get into an ice bath (it feels good after running so long!). This time, other than the upset stomach right after I got home, I felt great. No soreness at all and instead of wanting to crash like I usually do I was feeling peppy enough to help Kevin pack up and unload some stuff at our new house.  So I’m going to try these gels again and based on how much they helped me recovery wise I’d recommend them to anyone, with the word of warning to use them slowly and plan your route well the first time you use them.