Around a month ago I began the mental equivalent of a marathon. Something cool that I had wanted to do for a couple of years. I hadn’t planned to blog about it because it’s not running or lawyering. And that is what this blog is about right?

That changed when I read THIS ridiculousness. There is justified profanity in the linked blog.

The linked blog shows the pages of a book called “Barbie, I can be a Computer Engineer.” It’s part of a series of Barbie books about different career paths. In the book Barbie is designing a game for computer class. Well, she comes up with “design ideas” but she needs “Steven’s and Brian’s help to turn it into a real game.”  Of course you do Barbie.

Barbie crashes her laptop and then Skipper’s laptop in the process of trying to email her designs and takes a timeout to have a pillow fight with Skipper to cope with the stress. Really dear author, you took it there?

Thank goodness Steven and Brian are around to save the day. They restore the computers and “turn it into a real game” in no time. Skipper is excited that Barbie “fixed” her computer and Barbie does so well in class she got extra credit for the game she designed. “Barbie’s terrific computer skills saved the day for both sisters!” ‘”I guess I can be a computer engineer!” says Barbie happily.’

The only skills Barbie demonstrated in this book were pillow fighting and getting Steven and Brian to do her work for her.  This book is for real, people.  It’s being sold as an “inspiration” to little girls who tell their parents they want to be engineers.  And now for why I’m doing this blog. The big self- realization. The big embarrassment.

I am this Barbie.

For perspective, I practice law 40 hours a week. I am not a dumb girl. I know my way around different platforms and I’m certainly not off engaging in a pillow fight while IT is trying to resolve my computer issues.

A few weeks ago I began taking online software development classes.  Right now I’m learning HTML & CSS through Codeacademy classes.  After I get through that I may take a class with Girl Develop It.

I want to learn the basics of coding because (a) I think software developers are some of the smartest people ever and coding seems like a cool thing to learn and (b) it means I can do more stuff for myself. Words are my trade and HTML is usually the medium when they’re on a website.

Then I got to the part of the lesson about adding static images without linking to an image. <img src=”picture URL”/> and nothing happened. My ninja image was not being added to the webpage. Life was hard. What did I do? I handed my laptop to my husband and asked him to figure out how to add my ninja. I was as bad as Barbie. To his credit, my husband handed the laptop back to me and said he wasn’t doing it. That then he would be learning the lesson and that wouldn’t do me any good.  This is the same approach he took last year when I had trouble creating pages and adding the nice city sunset background to this blog. He told me I’d figure it out eventually and that’s how I’d learn.

And I did.  All the pages, all the links, and the city theme on this blog- I created all that. And it’s been fun. Eventually I got the damn ninja on my page. It took me twenty minutes and it still didn’t look quite right but I did it. “Lesson passed,” it told me.

So ladies. Tech ladies. Women thinking of doing tech sort of stuff. If you want to learn how to do something you need to do it yourself.  No running to the Steves and Brians of the world the minute the going gets tough. That’s only hurting yourself. And I promise you can learn to do it on your own.

For example, watch me insert a static image now. 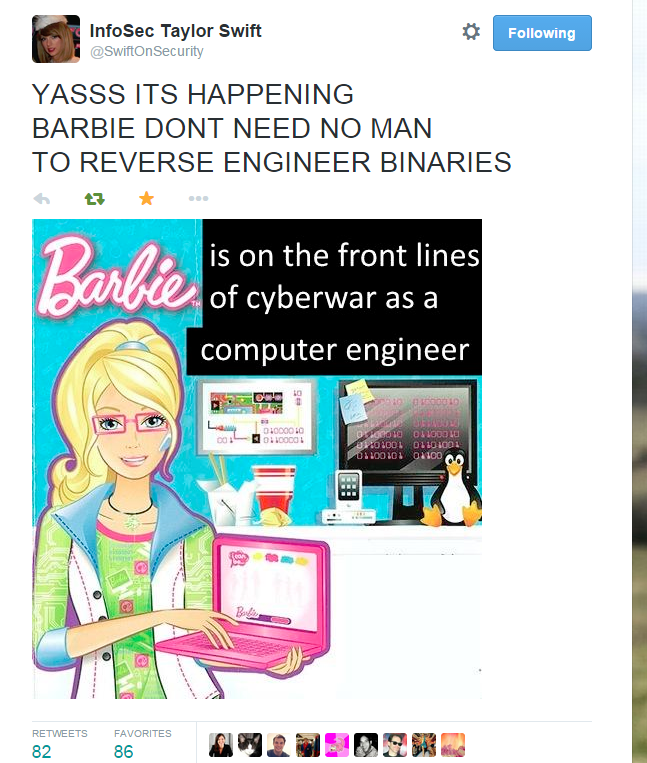