I’m taking a bit of a running breather in 2015 and won’t be doing another marathon.  2015 will be the year of normal looking feet.

Instead I’ll focus on improving my time in the half marathon, with the goal of getting in the 2:00 range by spring or early summer. That would mean a goal pace of around 9:10 per mile. I think this is doable since I finished my last half in 2:04:40. I think it might be cool to do it at the same race I did the 2:04:40 in (the Stratton Faxon Half Marathon).

I had planned on getting in one last half in November before winter hibernation, but on my first long run post-marathon my ankle started to bother me again and afterwards I saw it had bruised in the same spot. I hadn’t paid the November race fee yet so bailing on it was an easy decision. That and the past injury was a little more serious than just tendonitis as I’d previously shared. I white lied by omission a bit in that post.

I did have some tendonitis. But I also had a “tibial stress injury” the doctor thought had begun to resolve itself. The tibia is your shin bone. Stress it enough and eventually you get a stress fracture. The crazy thing is the shin injury was more serious than the ankle injury and I didn’t even know it was hurt. I didn’t even have shin split like pain, it only bothered me when the doctor and therapist poked at it.

The doctor was certain I didn’t have a stress fracture yet and given that the injury seemed to be healing so long as as I kept going to physical therapy, iced it regularly, and was “honest with myself” about the discomfort he would clear me to run the marathon.

The doctor had worked with runners before and said that he knew being honest about pain is the biggest problem we have. He gave me an awesome speech about it. Below is a dramatic snippet.

So I ran the marathon with this speech in mind. I guarantee you if my ankle or shin had started to hurt I would have stopped!

With the big day over and the ankle flaring up again, I followed the “being honest with myself” bit and purchased some insoles to correct my overpronation. I have very high arches, which means my ankles roll inward. The constant rolling inward over all those long runs led to my problems. Ever seen Barbie doll feet? She has some high arches. If Barbie came to life and walked much at all she would definitely need insoles.  Maybe that is why there is no marathon Barbie.

I initially thought I’d get some Dr. Scholls insoles but one of my physical therapists said he had people with different foot problems stand on the Dr. Scholls machine one time and the machine recommended the same type of insole for everybody.

So, I searched around online for insoles for high arches. All signs pointed to Superfeet. Specifically green Superfeet.  I bought them off Amazon for around $36.00. Way cheaper than custom made orthotics and they arrived in two days.

I don’t know if the Green Lantern wears insoles but I bet if he does he wears these. 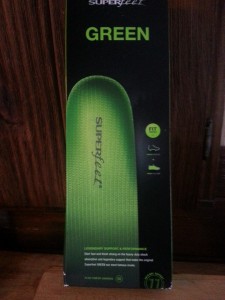 The arch support looks about as thick as my old insoles but the Superfeet material is much sturdier. The old insoles flop over if you lightly press them. Not much help in supporting the foot at all. These hold up, my ankle stayed put when I ran in them. 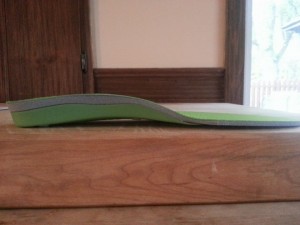 Highlights of the Superfeet on the back of the box.  The anti-stink coating is the first thing listed. Most important thing first. 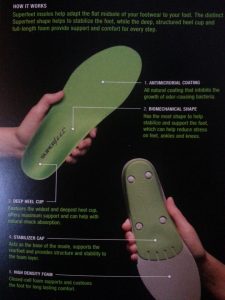 It took a bit to get used to the change in how my feet moved in these (or rather, didn’t move thanks to the stabilization.) I walked a few days in them and finally put them to the test by running 3 miles in about 30 minutes. No ankle issues at all!  To make sure my review was thorough I also sniffed those insoles after the run.  I didn’t smell anything so I guess the anti-stink coating works.

The box says the insoles last about a year or 500 miles, whichever comes first. When I’m not training I run about 21 miles a week so I should be replacing mine about twice a year.