I work for a communications company and every so often I read reviews of our products and services. The other day I was surprised to see a review that included a review of our terms and conditions! Better yet, it seemed the reviewer thought our terms were A-Okay.

“My first take on the … legal department is that they are operating a pretty straightforward technology platform, and are respecting the interests of both developers, as well as end user.”

Here is the full review.

I couldn’t think of a better way to get in the holiday spirit than to go nuts saying what I think about a third party contract.

Of course, I want to respect other companies drafting preferences and so I thought carefully about what contract to review.

Every so often someone will ask me if it’s okay to use a contract from LegalZoom or if they really need to go to a lawyer. Today, I will attempt to answer that question.

I bought myself an Independent Contractor Agreement from LegalZoom! Merry Christmas to me!

The first half of my review follows.

My first step was to see how reputable LegalZoom is. I checked out their BBB page.  In the last three years alone they’ve had 170 closed complaints, with 101 being closed in the last month. 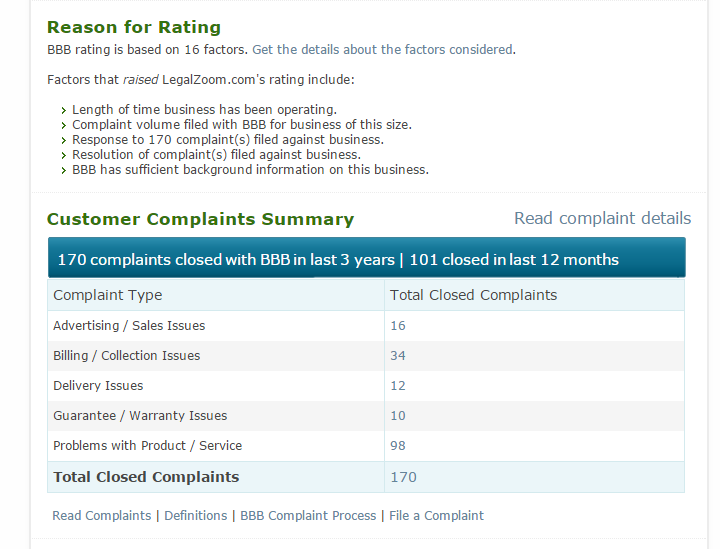 There isn’t always fire where there’s smoke, but this was an awful lot of smoke. So I checked out a few of the 98 complaints under “Problems with Product or Service.”  The ones I reviewed said they were closed by LegalZoom offering to issue a refund, with one of those instances being closed by the BBB saying they thought that a reasonable solution over the customer’s objection.

3 randomly pulled complaints are copied below. 2/3 I can’t fault LegalZoom for.  They’re just providing the forms in these instances, not actually providing legal work. 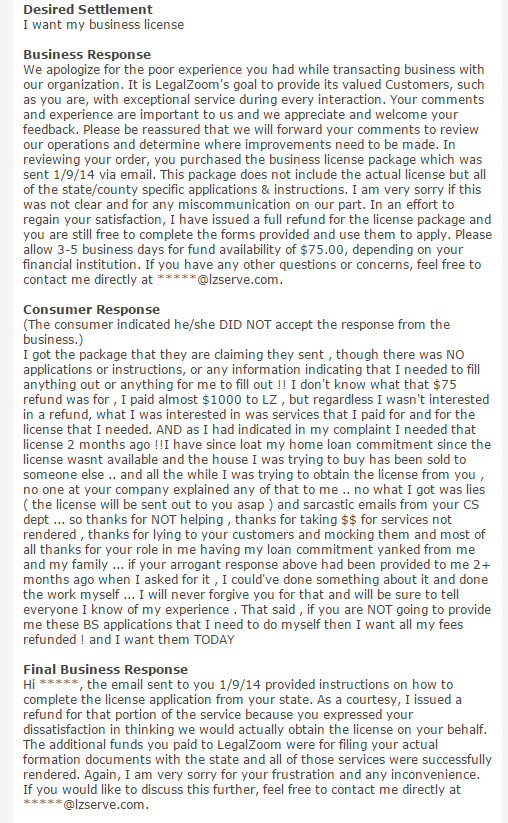 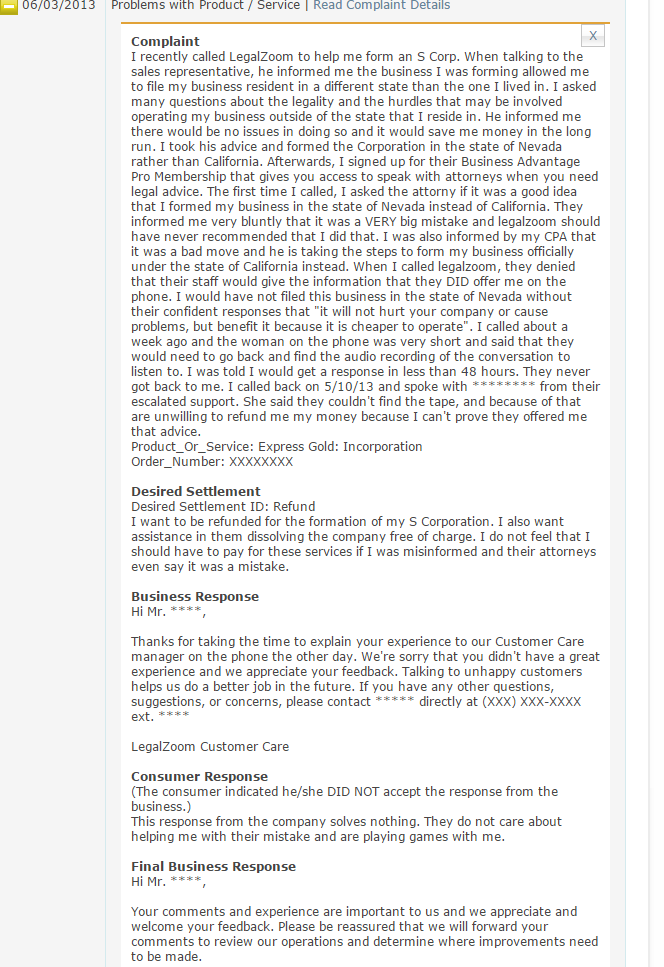 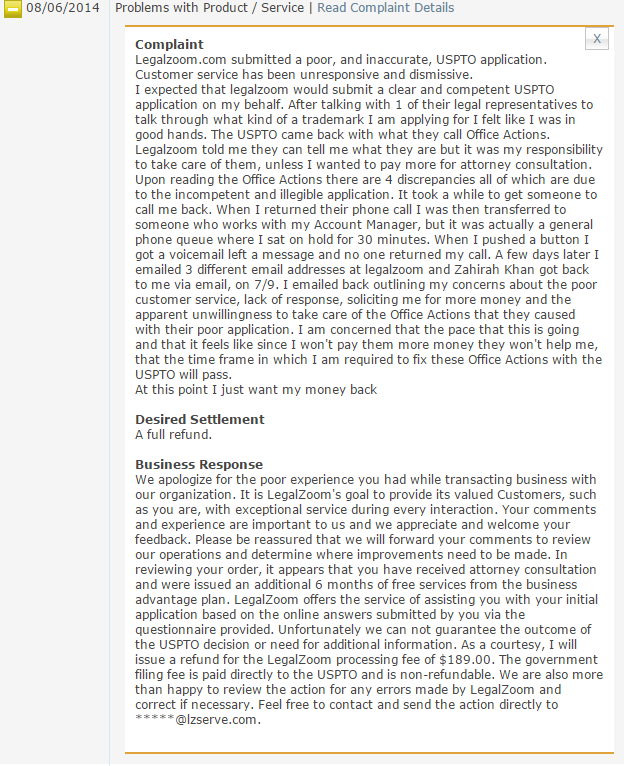 Just using a form LegalZoom provided does not magically give you a trademark registration or secure a business license. That requires follow up work. Speaking from personal experience on the trademark aspect, most submissions result in “Office Actions.” The USPTO frequently asks for descriptions and classes to be changed. That’s definitely not LegalZoom’s fault and they can’t be expected to handle the application through to registration for only $189.00.

I lay the blame 50/50 on the second complaint. The customer shouldn’t have been relying on a salesperson for legal advice and LegalZoom should train sales not to offer legal advice.

From the sampling of BBB reviews alone I don’t see anything terribly wrong with the forms themselves, I see a problem with false expectations.  If you want a trademark registration secured or a business incorporated you ought to seek assistance from an attorney. LegalZoom might be able to get you started and the cost upfront for that is low, but you’ll eat the cost on the backend when you have to seek legal advice to get where it is you were trying to go.

Being in technology I couldn’t wait to see what sorts of contracts “Internet/Technology” had to offer me. 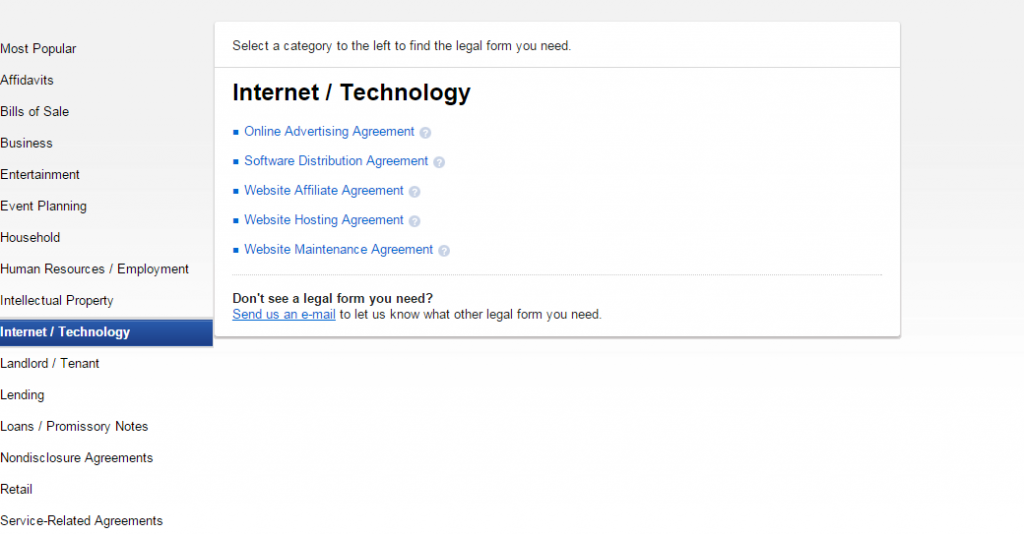 I thought the Software Distribution Agreement looked most promising but when I clicked for the description it seemed very out of touch with most tech companies’ distribution models. It said it was an agreement for a company that had developed the technology but needed another company to “establish efficient distribution chains.”  Newsflash LegalZoom. Establishing “distribution chains” is not really the hard part for tech companies.  They distribute the software directly themselves under EULAs and through channel partners.

Then I tried Service Agreements. Thought maybe I’d see some SaaS, some hosted, some cloud contracts.  Not happening here. These are different sorts of services. 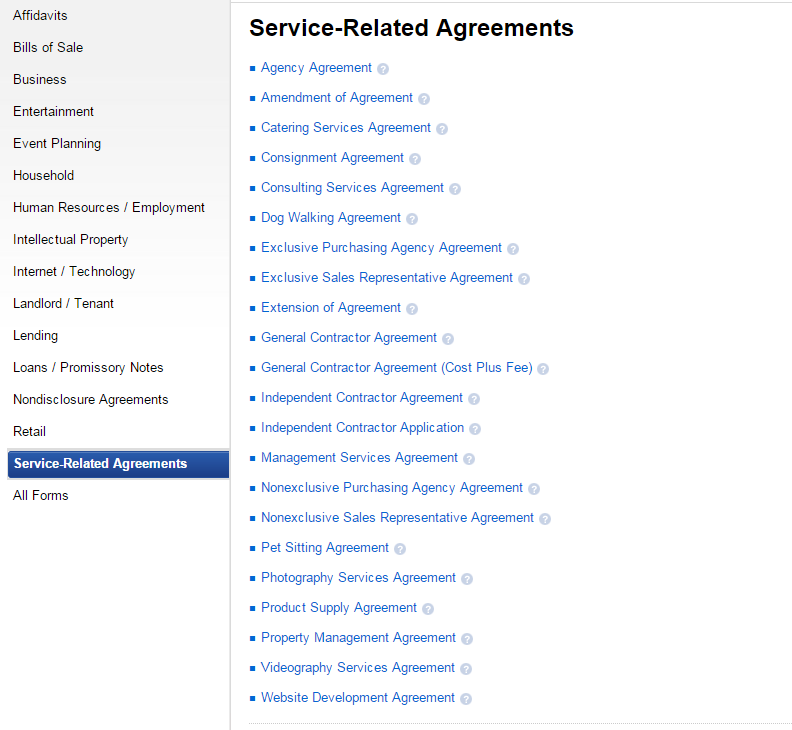 I decided it was time to pick my poison and chose the “Independent Contractor Agreement.”

The independent contractor agreement cost $14.95 and came with a guide and instructions.

Thoughts on using LegalZoom if you are a tech company. Don’t. The dog walking agreement is not a fixer upper. Not even for $9.99.

Thoughts on the Independent Contractor Agreement and Guide/Instructions

The agreement came a 14 page Guide and Instructions.

The Guide and Instructions explained why companies choose an independent contractor arrangement over an employee/employer relationship, clarified that the contract is only a starting point and should be tailored for your situation, and stated that LegalZoom does not provide legal services and is not a substitute for an attorney. It made it quite clear if your situation is complicated not to use the form, but to contact an attorney.

There was a handy checklist of steps along the way to closing the deal with the independent contractor and explanation on the meaning of the terms and conditions of the contract itself.  It was an exhaustive listing of steps, complete with “sign above the signature block” and “actually do what the contract says after you sign it” sort of explanations. The contract was 18 pages long, with four pages being either a signature block page or exhibits with tables. I personally liked the lengthy checklist, but I’m sure others would find a 14-page explanation for what was really only a 14-page contract off putting.

I thought the guide/instructions did a good job of explaining the basics, particularly in explaining the boilerplate that frequently appears in contracts. It also provides some “optional language” you can add or removed depending on your circumstances and explanations on the consequences of those modifications. Also included are helpful drafting tips. I give the checklist high marks for being thorough and accurate from a boilerplate perspective.

The problem is that your situation is not boilerplate. Every business deal is different. You are a unique little snowflake in need of your own customized contract. Sometimes just a few wrong words can put you in a world of hurt.

An example I saw in the checklist was the “work for hire” section. It mentioned that generally the person who invents something owns it, unless an agreement is signed indicating the work is “work for hire” and the company the work is done for owns it.  That’s great unless what the consultant is doing is developing software. Software isn’t one of the nine items that can be a work for hire.  That’s why you just do an assignment and say whatever the contractor develops under the agreement is yours without labeling it as a “work for hire.”  For more information on the software and work for hire issue see this article.

Taking it with a grain of salt

If you use a LegalZoom form remember that it’s just a starting point and ultimately it’s up to you to make sure the form fits your circumstances.  Next up comes a review of the contract. Unfortunately I won’t be able to share my redline as you have to pay for the LegalZoom contract if you want to see it. However, I can generally comment on any shortcomings I see and give you a sense of its adaptability for a technology company.

¹A lawyer’s definition of “a light touch” may be a bit different than the layperson’s though ;).