For the holidays Kevin and I decided we’d go see two Broadway plays. I miss a lot of things about living in the South but being 35 minutes from NYC has its perks :).

The first play we saw was The Real Thing. 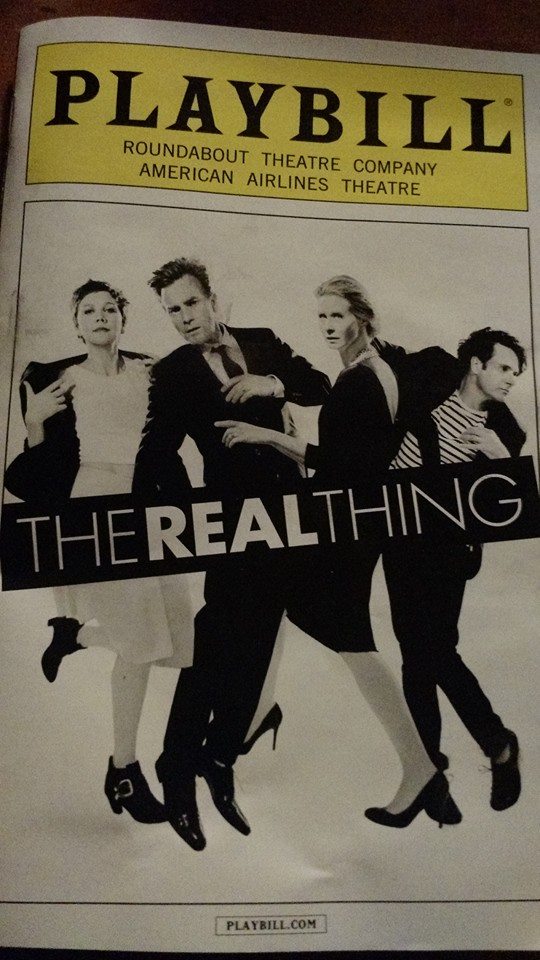 Maggie Gyllenhaal, Ewan McGregor, Cynthia Nixon, and this guy from Gracepoint were in it.  I’d love to tell you how awesome it was.  But it was not awesome. The storyline was hard to follow and there were weird intervals where the actors/actresses would change out the stage props while they lip synched to 60’s music and danced around. After I got over the novelty of watching Ewan McGregor lip synching “Sugar, Sugar” while he moved tables and books there wasn’t much left to keep my interest. The best I can say about The Real Thing is that the screenplay had the events arranged in chronological order and the actors/actresses did a great job of keeping things in that order.

The second play we saw was Cabaret. We arrived a little flustered after having had to maneuver through protesters (they were protesting police violence, not Cabaret) and almost missing our dinner reservation at The Lambs Club. Our train to the city was running late and the restaurant advertised that had a 15-minute grace period, which we were way past. Since this was a pretty fancy place we had a sinking feeling that they might not hold our table. We arrived and said we had a 5:30 reservation. The host replied, “AHAHAHAHA, oooh that’s too bad!” Turns out he had a sense of humor. There were plenty of tables and the food was great. 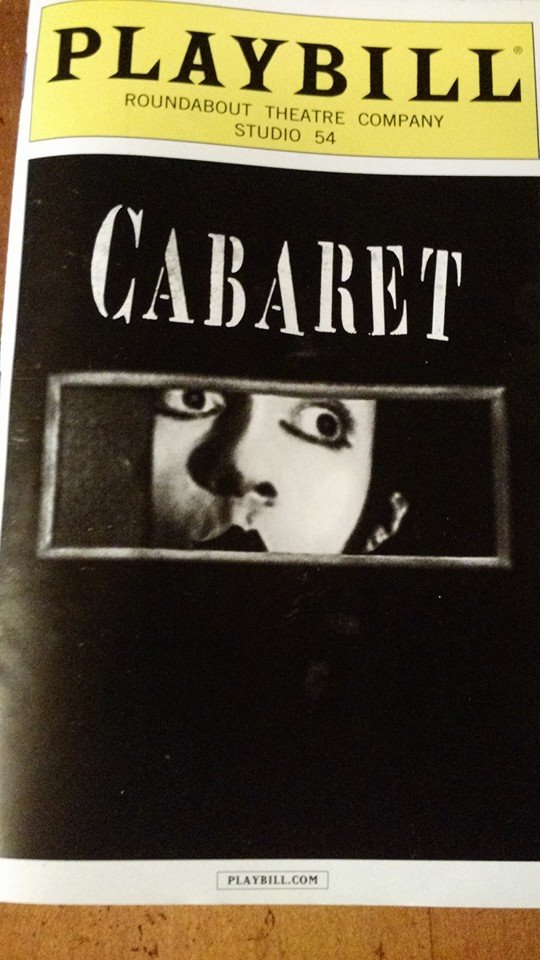 Cabaret was inside the former Studio 54.  Most of the plays we’ve been too so far have theatre style seating, no food or drinks. Space is usually tight as a coach airplane seat and if you have long legs it can be tricky trying not to kick the person in front of you. Not so at Cabaret. It was set up like a nightclub. We sprung for a really good seat in the front that had plush loveseats for couples and round tables for bigger groups. Waiters and waitresses that weren’t wearing much (it was a burlesque show after all) served drinks and food before the play started and during intermission.

Emma Stone played Sally (star of the nightclub) and Alan Cummings was the emcee. Both of them were great! I’d read bad reviews of Michelle William’s turn as Sally and was glad Emma replaced her by the time we saw it. It turns out Emma is a super talented singer and she acted to the hilt.

I knew Cabaret was a burlesque show set in a nightclub but that was all I knew going into it. It turns out the show is set in the 1930’s Berlin.  It was a much more serious play than I’d realized, covering the Nazi occupation and ending with the incarceration of the emcee in a concentration camp.  Grim subject matter interspersed with the song and dance and it was really moving.

I have a side story about that night.

We were sitting in one of the loveseats before the play started and my attention was drawn to a couple sitting at the table in front of us when an usher told them they weren’t allowed to take pictures inside. Not even of themselves.  The woman was robotically flawless.  She wasn’t supermodel pretty, but everything about her was perfect. Like she’d never had a bad hair day or a skin freak-out ever.  I’d never seen someone that flawless looking in person. While I was looking at her I began to think she looked kind of familiar.  Then it clicked. This woman was Amanda Seyfried. I hope this doesn’t sound hateful, but I never thought she was particularly pretty in the movies so I couldn’t believe it was her at first.  I don’t know what they do to her in hair and makeup because in person she looks incredible. Anyway, I turned to Kevin to say it but he beat me to the punch with “Amanda Seyfried is sitting in front of us.” Good to know I was not crazy. The lady next to Kevin was looking at pictures of Amanda Seyfried on her phone trying to figure out if it was her or not.  We probably should have confirmed it for her. But the story gets even crazier.

So the play starts and about fifteen minutes in a bearded guy is led to that same table by an usher with a flashlight. Bearded guy sat right in front of me blocking my view. Kevin had to scooch over so I could see better. Lights came up during intermission and as I heard Bearded Guy talk to Amanda I thought I knew his voice from somewhere. I could see him from the side and thought that really he was not that bad looking beneath the beard and as I kept looking it dawned on me. That voice was Toby Maguire’s voice. I turned to Kevin again. Have you ever played Two Truths and a Lie? “Toby Maguire is sitting in front of us” was my truth that sounded like a lie. It was an out of body experience just saying the words.

I played it cool like this sort of stuff happened all the time, too cool to even attempt to sneak a photo. Truthfully I probably would have sneaked a photo if I were better at doing that sort of thing.  So that is my story about the time I sat behind celebrities.

On Christmas Day we drove to my cousin’s place on Long Island.

We got there around noon and stayed until 7. My cousin is as great at directions and time as I am and thought it would take us 3 hours to get there. It took us 1. She loved our surprise early arrival ;)!

While we were there we learned things. Like an 11 pound bone in ham takes a lot longer than two hours to cook. And that immigrants coming through Ellis Island had their eyelids turned inside out with button hooks for inspection. Thanks Ellis Island history book!

We also speculated as to what led my cousin’s Santa to hit the bottle. 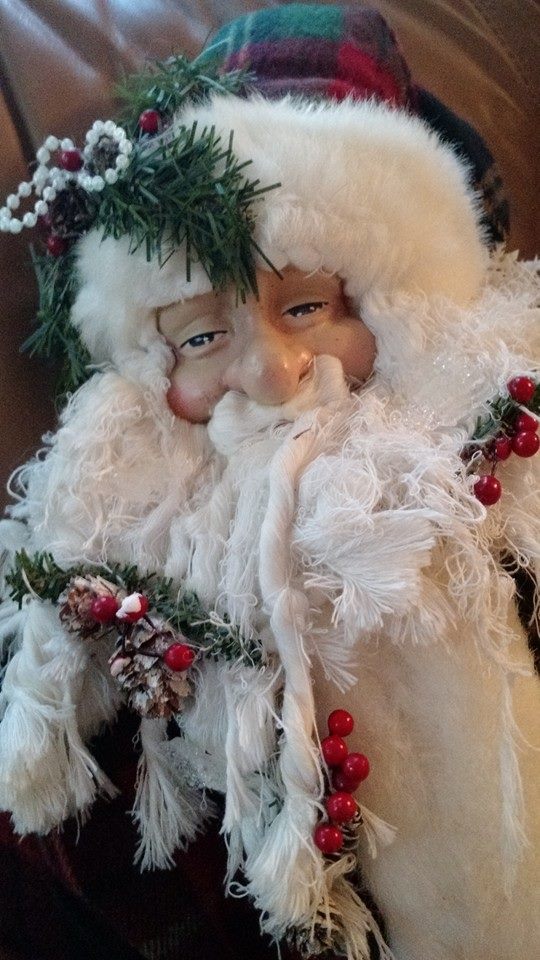 It was fun catching up with my favorite NY cousin and the rest of the crew that we only get to see around the holidays.

The day after Christmas we had dinner with a coworker in town visiting family. I’m the only employee in NY or anywhere close to NY so I jump at the chance to hang out when one is in town.  We really (okay,  I really) wanted to go to this place called Capeesh. Because who wouldn’t want to eat at a place called Capeesh? So I called the number to get reservations and was interrupted with “Hello? Hello? Ma’am you have the wrong number.”  She was not taking dinner reservations at her home. Then I tried filling out their form. No response.  Emails sent to them got a bounce back. I explained the situation to my coworker and he suggested that I call the paint store next door to ask if Capeesh was in business. I felt funny doing that and he thought maybe I could say I was going to come there and pick out paint and I might get hungry shopping for paint and were there any places to eat nearby.  I probably should have done that just for the story but wimped out.  Ole Mole was another contender but he refused to eat at a place called Ole Mole.  We wound up picking Quattro Pazzi . For a place with such a boring name they had very good food and service. It was a fun night hanging out with him and his wife.

On New Year’s Eve we went to our friends Susan’s and Leon’s place.  Now that we live in Pelham we’re only about 25 minutes away from them. Kevin and I, three other couples, and their kids hung out, drank wine and ate take out Chinese food.

I told them in advance there was no way I’d stay up until midnight and that we’d probably have to leave around ten but we were having such a good time I didn’t realize it was twenty minutes until midnight until I saw two of the guys sleeping in their chairs. The minute I saw them sleeping I couldn’t keep my eyes open (I know, I know- with only twenty minutes to go!!!) so we took our grapes and headed back home.  I wasn’t keen on being on the streets right after midnight on New Year’s eve either since not everyone knows when to surrender their car keys and wanted to get off the roads before then.

This was taken close to midnight. It was so nice to welcome the New Year with such great folks! We had a wonderful time. 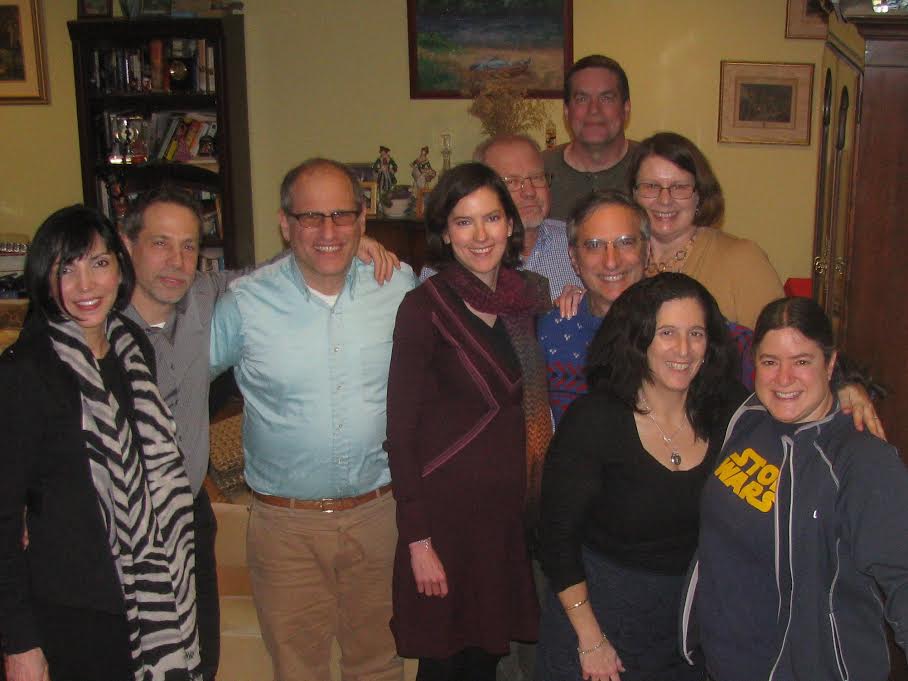 About the grapes, it’s a Spanish New Years Eve good luck tradition to eat twelve grapes, one on each stroke of midnight.  Susan packed 24 grapes to go for us and I made sure to eat mine right at midnight, can’t hurt.

My birthday was coming up and Kevin asked what I wanted. I told him “I want to take a First Aid and CPR class.” I am a practical person. Who wouldn’t want to learn this stuff? He said okay, but not for my birthday. We take a fair number of fancy vacations and do cool stuff during the year so I wasn’t expecting anything.  But the night I was getting ready to go to Susan’s place in walked Kevin with Tiffany blue! 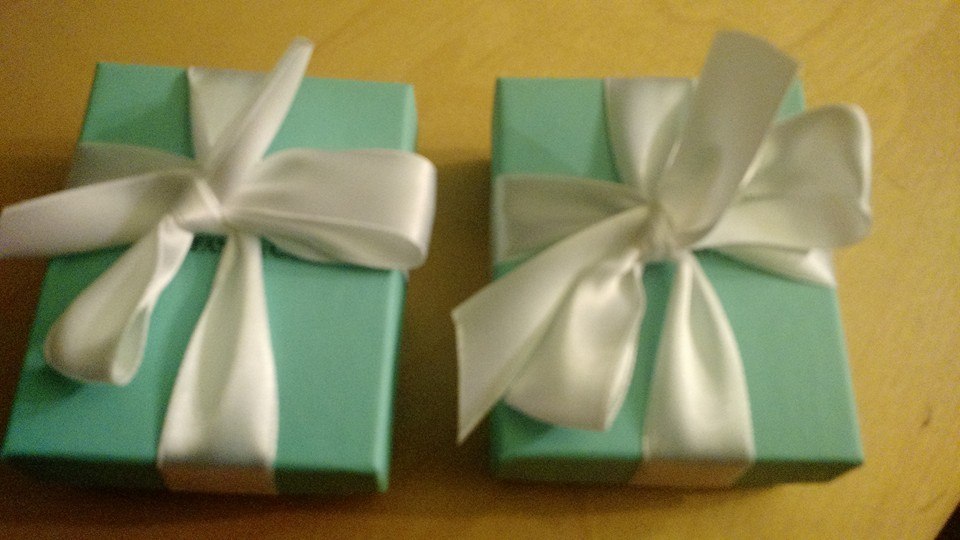 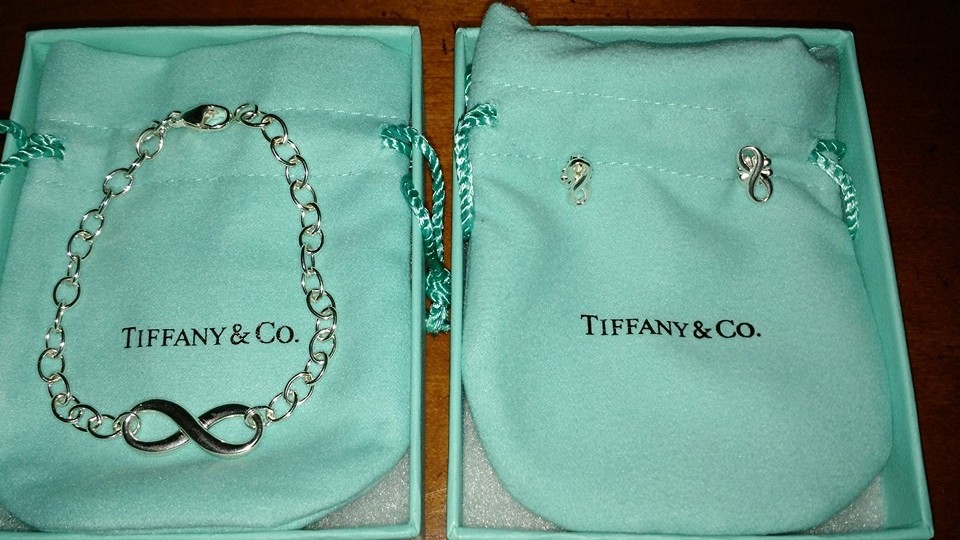 Kevin had made a surprise trip to Tiffany to buy me earrings and a bracelet that would fit my little birdie wrist! I love him :).

The rest of our time off.

Kevin turned the guest room closet into an electronics closet. 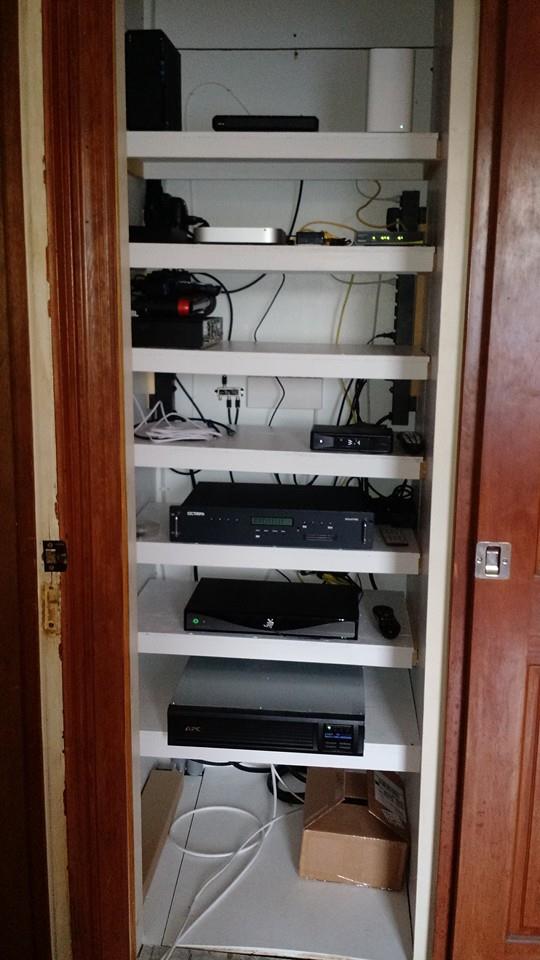 This is Jazz and she helped by running through the paint. 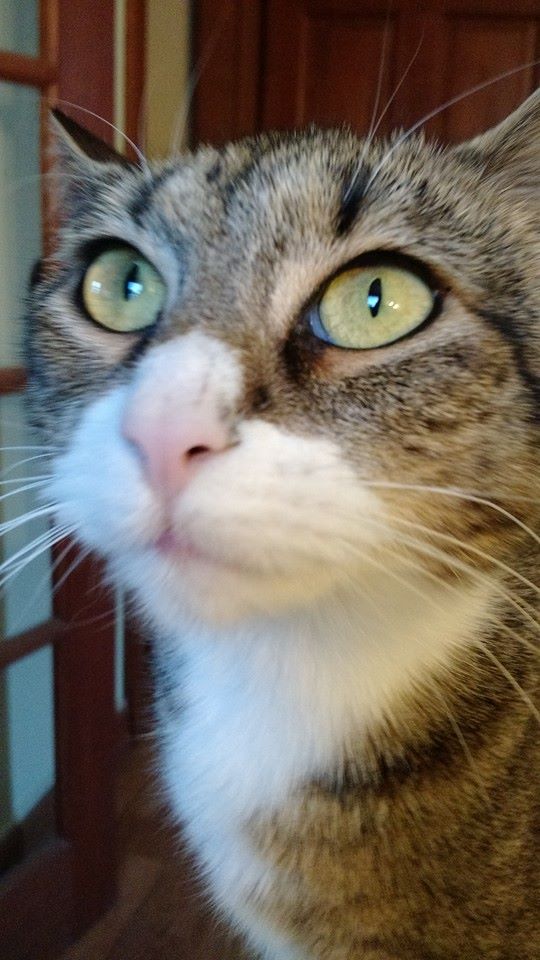 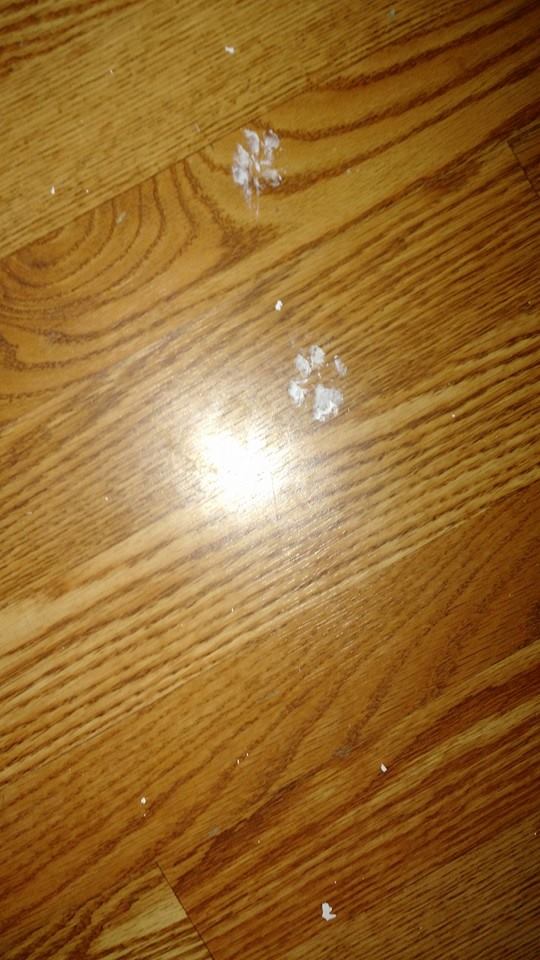 I spent most of my time off making sure I had all my bar deadlines and tax stuff for the year in order. Juggling three different bars, even with being revocably retired in one, is tricky. They all have different rules. I noticed while I was going through all this stuff I was missing two forms.  Not a lot makes me so anxious as realizing I’ve lost an important document. It is the lawyer in me. I hate losing paperwork. When I realized I’d lost the first one my left eye started twitching.  Then I saw I’d lost a second one and my right eye joined in the twitching party. I busted out my P-Touch label maker and I organized the tar out of that filing cabinet. It is now organized alphabetically and also by year. If I could have worked the Dewey Decimal system into my organizing frenzy I would have.