“International Overdose Awareness Day (IOAD) is a global event held on August 31st each year and aims to raise awareness of overdose and reduce the stigma of a drug-related death. It also acknowledges the grief felt by families and friends remembering those who have met with death or permanent injury as a result of drug overdose.”

I thought off and on for awhile about if and what I should write about my brother passing but held off because somehow writing the words feels like it is making it a truth that he is no longer here and that is hard to handle.

It would be a dishonor to him though to be silent on this day.

My brother died of a drug overdose.

I learned after his death that people I spoke to every week had been coping with their loved ones battling addiction also.  So many people.

People, well most people I know anyway, mostly post the happy/funny stuff on FB. The  vacations, the races, the funny stories.  I did that. I still do. If you look back at some blogs I’ve written in the past though, like this one, I referenced dealing with stress.  Life isn’t all unicorns and rainbows for ANYONE regardless of what they post or what their lifestyle is like. Hardships do not discriminate. The stress I was referencing in that blog was my brother’s addiction.

If you see your friends only posting the good stuff you think maybe you are the only one dealing with real serious heartbreaking and tragic issues. Nope. You are not. You are not alone.

I talked for hours with the people who were struggling and thought they were the only ones.  They hadn’t had many people to talk to because when your loved one is battling addiction it’s not something most people are public about. I don’t regret staying quiet publicly about it.  I stayed quiet to protect my family. It’s hard to try to fix the issue when you have the noise of the Facebook peanut gallery. It was the right thing to do. And now it is the right thing to do to say something. If I have any friends whose loved ones are going through addiction issues and you need to vent you can reach out to me. You can’t fix your loved one. Not money, not rehab, not family/friends or the right words can fix your loved one. Only they can. But you can work on how you react to it and take care of yourself and one of those ways is by confiding in what’s going on.  I confided to a trusted few before my brother passed and received judgement free listening and empathy. It helped.

Here are a couple of things I learned during all this.

I used to think the addiction was a choice and I was so angry so much of the time at the actions and choices made along the way.

I don’t fully believe it is a choice anymore.  I think it truly is a disease and I think genetics may play a large role. One of my uncles also died of a drug overdose at a young age.

After his passing I saw and learned some things that made me realize very largely it was not a choice. If there was a choice, it was a very very small percentage.

One of the things that convinced me was the below poem.  He’d struggled with addiction even as a teen and my parents got him help by sending him to live for 18 months at a wilderness rehabilitation program for troubled kids called Three Springs. After he passed my best friend and I went in his apartment so I could gather things for my parents and myself. We picked up a notebook of poems Brian had written and sketches he’d done while he was in Three Springs. This was one of the poems.  He was struggling, hard, 20 years ago. He wanted to change and he loved me. 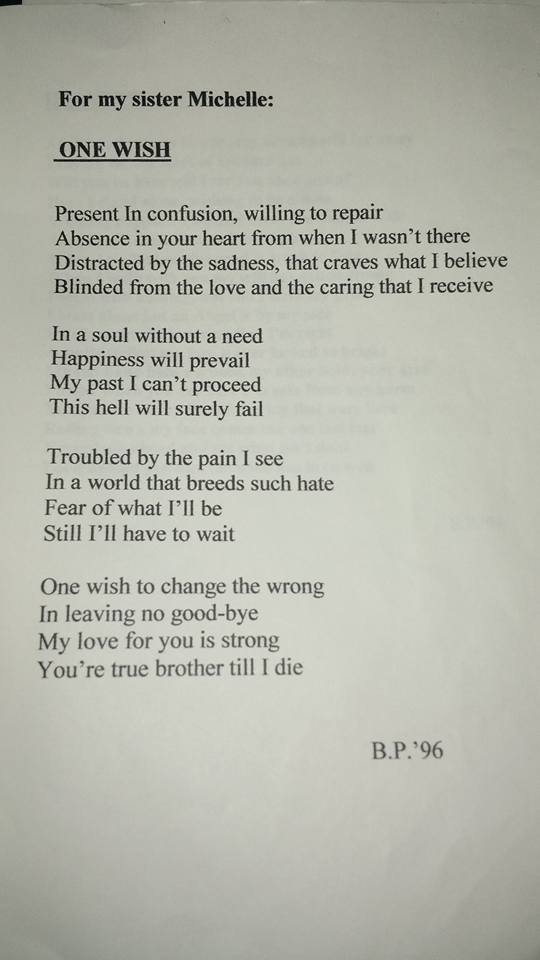 Something else I learned, and I know people say this all the time but it is so true, is you really never know when the last time you speak to someone will be so think carefully what you say. I am so very thankful my last words to him were good ones and not ugly.  It is hard to love someone through a drug addiction and hard to be close to them, but distance and not speaking very often is far better than knowing the last time you saw someone involved a fight or hateful words. I can promise you that this is true.  I came very close to my last words being hateful ones and I am so so thankful they were not.

Another lesson learned, and I am going to steal this from my best friend Leslie, “Look up, the world is in front of you and not in the palm of your hand.”

So many people are glued to their smartphones and nowadays everyone wants to post every little thing on Facebook and get their news from Facebook rather than from friends and family. It is impossible to control news being spread and being spread quickly.

I learned to be present, really present after Brian passed.  On recent vacations I took FB messenger off my phone.  I still had my phone but I mainly used it to take pictures.  I learned to talk to my parents more often and to make an effort to call my best friend more to chat instead of checking in on Facebook.

I learned this because I officially learned of my brother’s death through Facebook.

First, I am not throwing anyone under the bus- multiple people independently posted of his death before I was made aware and with my brother having 567 Facebook friends even with the original posts being deleted the comments spread like wildfire. There was no putting that fire out.

I say officially learned because my brother had been on a steep sharp decline recently and I felt very strongly that he had overdosed and not been found yet. I am not claiming any psychic bullshit here, there were things going on that made it clear he was in trouble. But I felt it so strongly that on July 6th, the day before he was found, I told my husband I thought he’d overdosed and had not been found.

The night of July 6th I turned off my phone. I always do at night because I am glued to it all the time and I need the digital detox with my husband at night to just watch TV, read other people’s blogs, and hang.

The morning of July 7th I opened my laptop and saw a message from my mom asking me to call her, that she and my dad needed to talk to me. The message didn’t say about what. Honestly, even though I had told my husband the day before about my bad feeling, I guess I couldn’t handle the truth because my first thought was he had gotten into trouble and I was mad about it.

Before I called my mom I went to Brian’s Facebook page to see if he’d posted about what happened. There were no posts from my brother. Instead there were dozens of RIP posts on his wall. That’s how I officially learned my brother had died. He had been found around midnight and my parents tried calling me dozens of times but my phone was off.

I regret not calling my mom before checking Facebook.  I should have. It probably wasn’t in anyone’s control once the tragedy had happened and news had leaked with so many people on the friends list. But it was in my control who I got the news from. I had a feeling and I should have called my parents first.

I thought about deactivating my Facebook account after that, but I live far away from where I grew up and Facebook is how I stay in touch with friends and family for better or worse. So I’m trying to reach a happy medium now by limiting social media use.  Focus on your friends and family and what is right in front of you and less on your phone.

Hopefully this helps somebody else.  This was a hastily written blog because I felt it was more important to get the message out given the day than the exact words and it is now dinner time :).

Love you Brian, so many people do and there is a void without your bear hugs and big smile.

If anyone out there reading this is going through similar issues but not wanting to talk about it, it might help to read stories that show you are not alone.  You can find those by going to Shatterproof.