Time to tell you the story of why I disappeared from the blog for a few weeks and share a revised 2017 goal.

What can cause a stress fracture?

You can see what caused it by looking at my run records.

Below is a screenshot from my MapMyRun records.  It’s representative of my speed every month, except for a blip downwards occasionally when I had races.  I’m just out trotting along, thinking about things and not motivated to go fast that often. It’s a steady pace, each day, each week,  all month, all year.

In 2017 my run goals included going fast. This is when the injury happened. January 26th.  I ignored it and ran hard again on January 27th.  On January 28th it was too painful to run.

I just assumed the way to go faster was to run as hard as I could every day.  I also ran hard in worn out shoes which didn’t help, but the real culprit was too much speed, too suddenly, too often.

I felt discomfort on the outer side of my left foot and in the arch close to my heel on January 26th.  Not so much pain as a dull ache.  I ran again on January 27th and it was the same thing.  I gave it a go on January 28th and it felt like my foot was wrapped in a fiery bandage.  It hurt like a mother trucker to run. I had to stop right away. I thought I had a bad case of tendonitis. I’d never had a stress fracture before so I didn’t recognize any of the signs.

I had a work trip scheduled the first week of February and didn’t think things were bad enough to go to the doctor before the trip. At the time it only hurt when I ran, things were fine when I walked. That changed while I was away.  The pain had also narrowed down from the bandage of fire to just hurting in one specific spot on the outer side of my foot. One of my roommates that week also had a foot injury and sympathized.   He’d broken a bone in his right foot and my injury is in my left foot. Between the two of us we had one good right foot and one good left one, so we would have done well in a 3 legged race.

We hobbled out together to Target and I bought an ankle brace that helped, but I still wasn’t walking around much. My coworkers and I took bets on what was wrong with my foot. We had three camps. Camp Tendonitis, Camp Fracture, and Camp I’m not guessing because I’m not a medical professional.  Camp Fracture guessed it correctly by googling my symptoms and telling me to take an Advil and see if it took away the pain.  She’d had fractures too and said Advil eliminated the discomfort but didn’t work on her sprains and strains. I took an Advil and the discomfort went away. Rut roh.

I see a podiatrist for my running woes

When I got back I saw my podiatrist to find out what was going on.  I know some of you may think of a podiatrist as someone that just deals with funky toenail infections or bunions and I don’t know if that’s true for most or not, but the one I see is a top notch guy that deals with all kinds of running injuries in the foot and lower leg. He knows runners and he knows running injuries.

I found him in 2014. I’d been seeing a physical therapist to help with an issue in my left ankle and tibia because I was weeks away from a marathon and knew I wasn’t going to be able to run unless I got help with the injury.  He asked me to go see the podiatrist to make sure nothing serious was going on and so we could safely expand the exercises I did in therapy.

The podiatrist checked my tibia and ankle and said I should be fine as long as I continued physical therapy and stopped (as in quit) the marathon if at any point I felt pain in the tibia.  I really appreciated him not being Doctor Dismal and telling me I shouldn’t do the marathon. I did wind up running it and had an awesome time.

Anyway, that is how I met my podiatrist.  This time, in the very back of my mind, I thought maybe something serious was going on because all of my other aches and pains have gone away with a day of rest. This time the pain was not going away and it had been around 12 days since the injury. Still, I thought it was a bad case of tendonitis. I thought he’d give me a cortisone shot.

He pressed on my foot to see where it hurt and asked how long it had been bothering me. Then, “I think you have a stress fracture in your cuboid bone.” Oh noez. Oh noez. Also, I have a cuboid bone?  If you were wondering where your cuboid is, here you go. 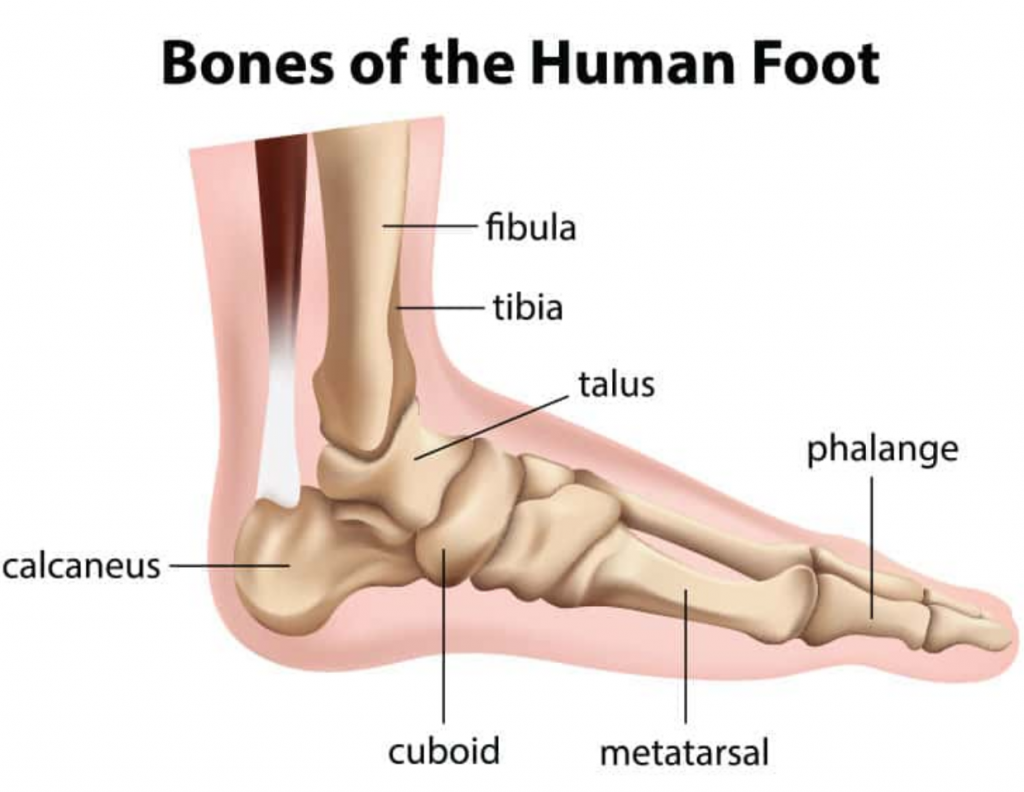 An x-ray didn’t show anything wrong. Still he was convinced enough that he wanted me to get an MRI and gave me this air cast aka boot to immobilize it. 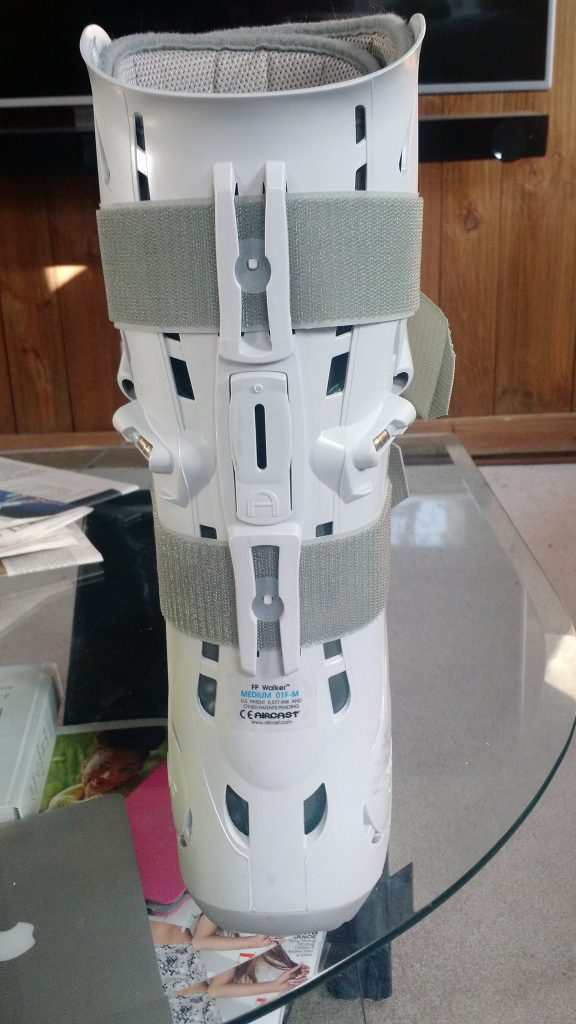 I will be honest. I barely wore the boot. I will be able to tell you in a few weeks if this was a really stupid decision or not.Once it didn’t hurt to walk short distances anymore I ditched it. Mostly because it was too difficult to walk in (I did have an Evenup and that did not help)  and to a lesser extent because it was depressing to be in the boot. I love cute shoes and cute boots and this boot is just horrid and very medical looking.  One would think they could at least produce it in a color other than that awful gray. It made a good beverage holder though.  I carried it with me on some trips in case I needed it. Waiting around in airports I would put it on the seat next to me and stick my soda bottle in it.

I will also admit I thought he was wrong because my foot felt better a few days after my appointment. So I made up my own little walking rehab regime while I waited on the MRI results. I told my friends the fracture wouldn’t be real to me until I had the MRI results.  One day I walked nearly two miles. This was definitely a stupid decision. I felt pain a mile and a half in. If your doctor thinks you have a stress fracture just chill out and wait for the results.

This is what my MRI looked like.  I spent the time between getting the MRI images and the results googling “MRI cuboid fracture what look like” and crowd sourcing to Facebook to see if I could get an answer soon.  We collectively agreed it looked like the problem was it looked like I had wisdom teeth in my foot. 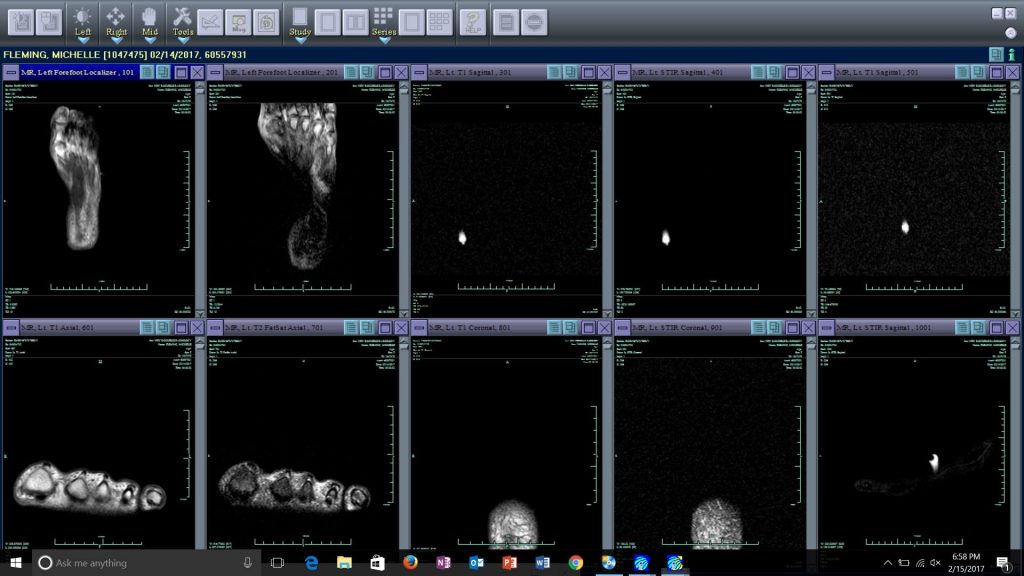 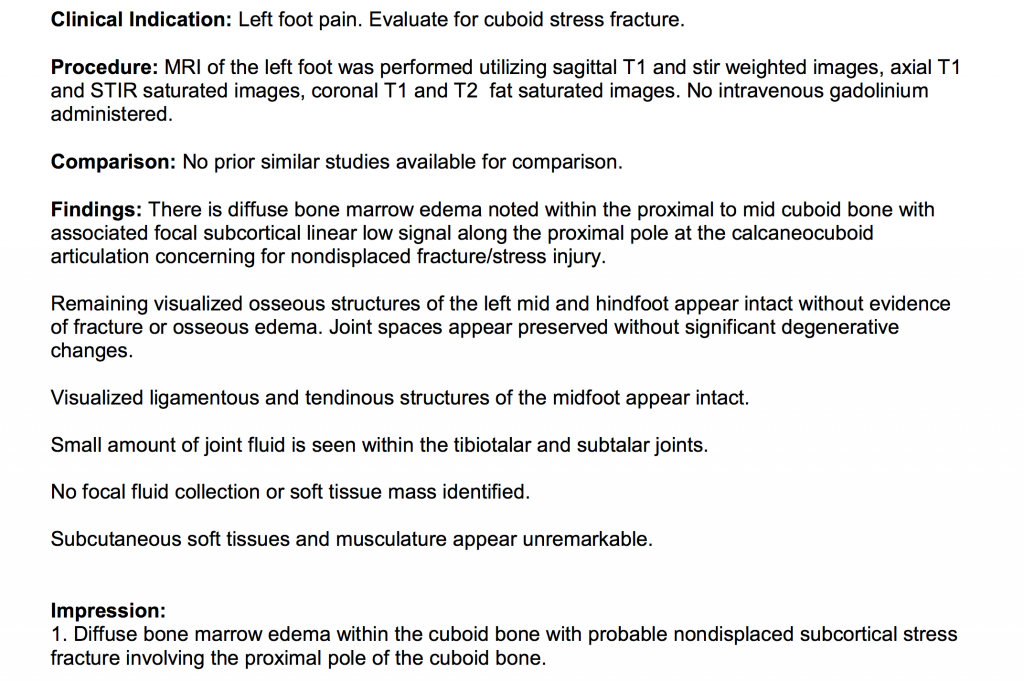 So yeah.  My orders were no running and no walking beyond what was necessary for 6-8 weeks.  I was also told to wear the boot. I have followed the no running/no walking orders but the boot was too much.

My 6 weeks is up on April 5th.  I am pumped. I’ll be following this plan to return to running. If it hurts I’m supposed to stop activity again and rest it for 2 more weeks. If it still hurts after 8 weeks I go back to the doctor. It feels fine so far so I’m not expecting any problems.

In hindsight, I wish I’d joined a gym and given pool running or other non weight bearing exercises a go during the time I was laid up.

The only sport I like to do is run. 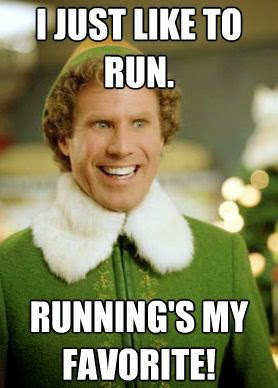 So it was too easy to fall into the no physical activity at all trap and I got cranky towards the end. If you just got diagnosed with a stress fracture my best piece of advice to you is to find a safe sport you can do during your time off.  It will really help with your mood.

One of my Alabama friends also got a stress fracture from running and she went the opposite direction.

She decided her goal during the time off was to learn to use every upper body machine at her fitness center and to become a kick ass swimmer. For fun she sprinkled some P90X upper body work outs in.  She is my hero. I wish I lived in Alabama because we could have been stress fracture work out buddies.

Some people get diagnosed with a stress fracture and decide they’re going to get six pack abs.  I would say this is the camp my friend fell in.

Other people get diagnosed with a stress fracture and decide they’re going to buy a six pack.  This is more along the lines of the camp I fell in.  The only exercise I’ve done during my time off was the push away from the table exercise.

My final piece of advice if you have a stress fracture. Do NOT walk far or return to running too soon. Two of my friends made the mistake of starting back too soon and got new stress fractures. You will have to do the 6-8 weeks of rest all over again if this happens.  Just wait it out.

I’ve also got an exciting revised 2017 goal to share :). I’d planned to do a 2017 fall marathon but with the fracture I don’t think it would be wise to do that this year.

I was wondering what my other options were when I got a brochure in the mail for the Avon 39. It was the first time I’d heard of this event.  Avon 39 is a long distance walk that raises funds for breast cancer research and treatment and to care for the families of survivors.  Day 1 is a 26 mile walk.  Day 2 is a 13 mile walk.  The women who do the entire thing are warriors. I’ve taken running 26 miles off the table but walking it should be no issue.  If all goes well with training I will be able to walk 26 miles by the time the October 2017 event in NYC rolls around. That’s the Avon 26.

My husband is going to train and walk with me.  We’re both walking 26 miles on day 1 in tribute to a neighbor that passed away from breast cancer in 2013.  You can find more info about it by going to the tab at the top of my website that says “Avon 39: The Walk to End Breast Cancer.”