About a month ago I saw the Pelham Track N Tri group was organizing a half marathon.

Pelham, NY is my new hometown and I was keen on meeting local runners and finding good spots to run here. There is no better way to explore a new town than to run it. The race promised to be a scenic one with a portion running alongside the Hutchinson River.

I figured I should be able to compress 3 months of training into 1, especially since I was starting with a solid base of fitness.  I ran 6 miles using major incline on the treadmill to prepare for the hills. And bam, my ankle complained. I bought Superfeet and scrapped the idea of the half.

That decision lasted until I read in The Pelham Weekly that pictures of the race and the names of the finishers would be in the newspaper. Who doesn’t like neighborhood fame? This was a week before the half. There was also a 6 mile option and I didn’t have to choose until race day so I went ahead and registered.  I spent the week polling runner friends to see if they thought a half was in the cards for me. I cherry picked at the beginning and only asked the crazy friends since I knew they’d say yes. You know, the ones who say they once ran 6 miles, they figured that meant they could do another 7 and so they signed up for a half. Those are the ones I polled.

Then I took it to the masses. The day before the race I asked the people of Facebook if I should go right or left at the start line (right for the 6 miles/left for the half.)  For the most part the people of Facebook said I should go left, with only two or three that said go right and go hard. One person said go straight to be a leader, not a follower.

I didn’t make up my mind until late the night before, but I ate like I was doing a half the next day. Your food the day before a half should not solely consist of cheese and Triscuits (my husband was out of town and left to my own devices I could eat nothing but cheese, bread, and wine for the rest of my life and be happy.)

I’m celebrating Thanksgiving late so I didn’t have a Thanksgiving dinner on the day of, but boy did I eat like I had Thanksgiving leftovers the day before the race. It was all turkey, all day.  I had two types Jimmy Dean breakfast sandwiches in the freezer at home.  Their cinnamon glazed french toast & turkey sausage griddlers and canadian bacon, egg white, and cheese sandwiches. I went with the canadian bacon one for breakfast. I’d set off the fire alarm grilling a few days before and that was not a fun night for me so that afternoon I went to DeCicco’s to find food that didn’t require a grill.

The deli section at DeCicco’s always has ready to go lunch and dinners, only a microwave required. The selection changes daily. It looked like they were trying to get rid of Thanksgiving leftovers. Turkey everything.  I grabbed a turkey panini with turkey and cranberry sauce in it, pre-cooked turkey burgers, a bunch of bananas (potassium!), and a couple of the fruit smoothie drinks I like to have the morning of any race. I already had plenty of high carbohydrate sides at home to go with all that turkey.

I set the alarm for five a.m. the next morning to get the hydration going.  If I could give only one piece of advice on how to run a half without training it would be hydrate like heck.  Start the day before and start early the morning of. If you don’t start drinking until an hour before the race it’s probably too late. Not counting coffee I had forty eight ounces (in Vitamin Water and the fruit smoothie) before I left. You can call me crazy or you can call me the person who successfully ran 15.6 with no training.

The weather was perfect for a race. A cloudy 47 degrees and the temperature wasn’t supposed to go past 52.

I’d decided I was going to run the half and that meant taking some precautions in case I died from not training.

I used the hydration belt to hold what I figured the necessities were. My driver’s license, my insurance card, lip gloss so I would be ready for a hospital selfie, and my phone. I changed a friend’s name to “Call If I Keel Over In Race.”  Susan, this was you and really I did it just so you could say “I told you so.” 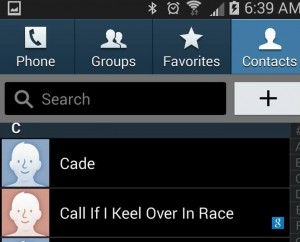 I walked over to the start of the race since it was close to my house and I wanted to get the race jitters out. It was around a mile.

The start was in front of the race organizer’s house. My guess is there were around 80 participants in the half. 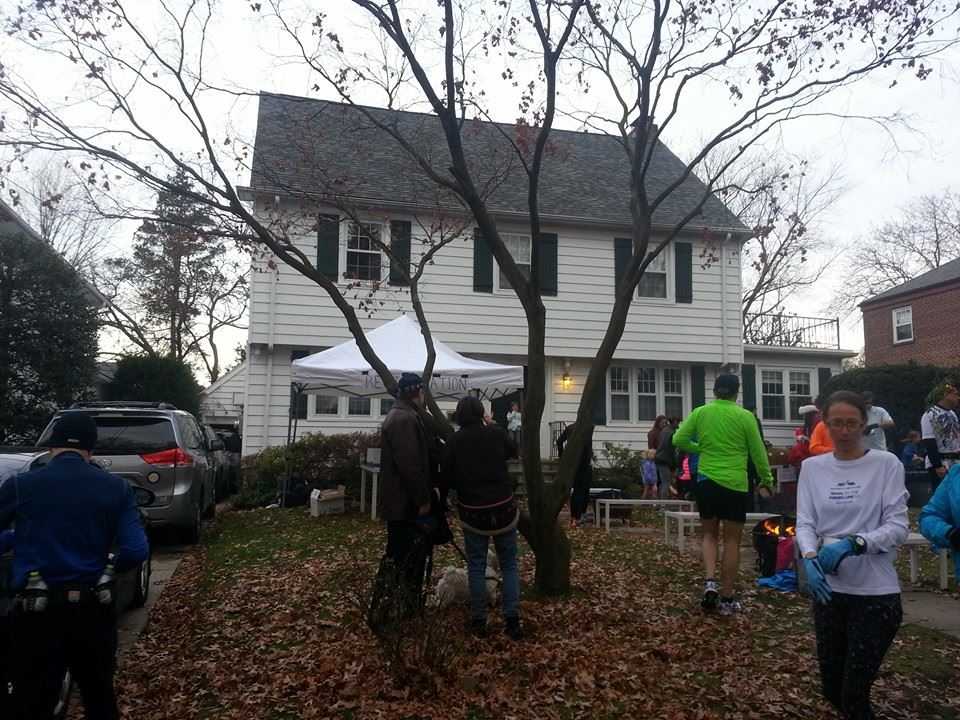 There was plenty of food, GU, and drinks available. And fire pits! 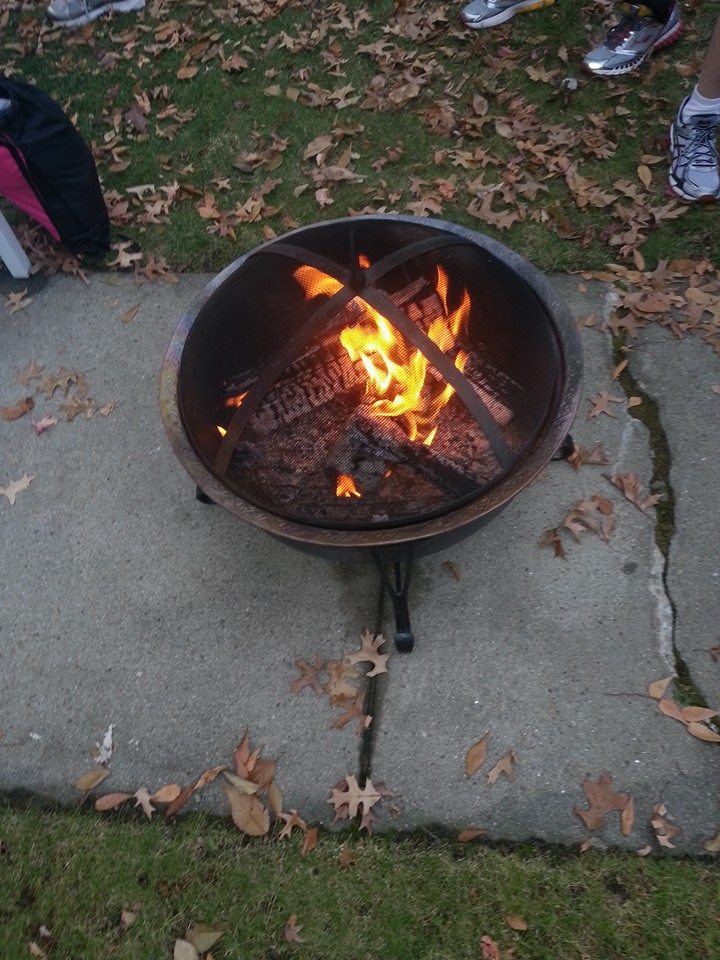 Pre-race a few emails were sent out letting us know there would be lots of twists and turns in the race course with the key turns being marked in yellow spray chalk. There was also a warning that the roads would not be closed so to run against traffic and to be careful. It was a very small race with all proceeds going to The Pelham Civic Association, so it was completely understandable. There are not many cars out that early on a Sunday in a small town anyway and the course was mostly in residential neighborhoods.

The emails included photos of the trickier turns and a map of the course.  There were also cue sheets available at the start to take with us.  I did not take a cue sheet because I figured I could find my way using the arrows. Wasn’t that just precious of me to think that way? I once got lost while I was traveling for work. But the place I traveled to was my hometown (where company headquarters is) and I was using GPS. That’s the starting point here folks.  And I turned down the cue sheet. Anyway…

After I signed in and got my bib, I chatted with a few other participants. I noticed one of the other runners had a Wineglass marathon bag with him!  I went up to him and we chatted Wineglass for a bit. He did it in 2013 and it was his first marathon also. He went on to do the NYC marathon in 2014 and finished in just shy of four hours. Gunner!  It turns out he was from the south also, Georgia. Small world!

The race started right on time. Here’s a picture from the back of the start line. If you squint you can see a photographer up on a ladder getting a photo of us. 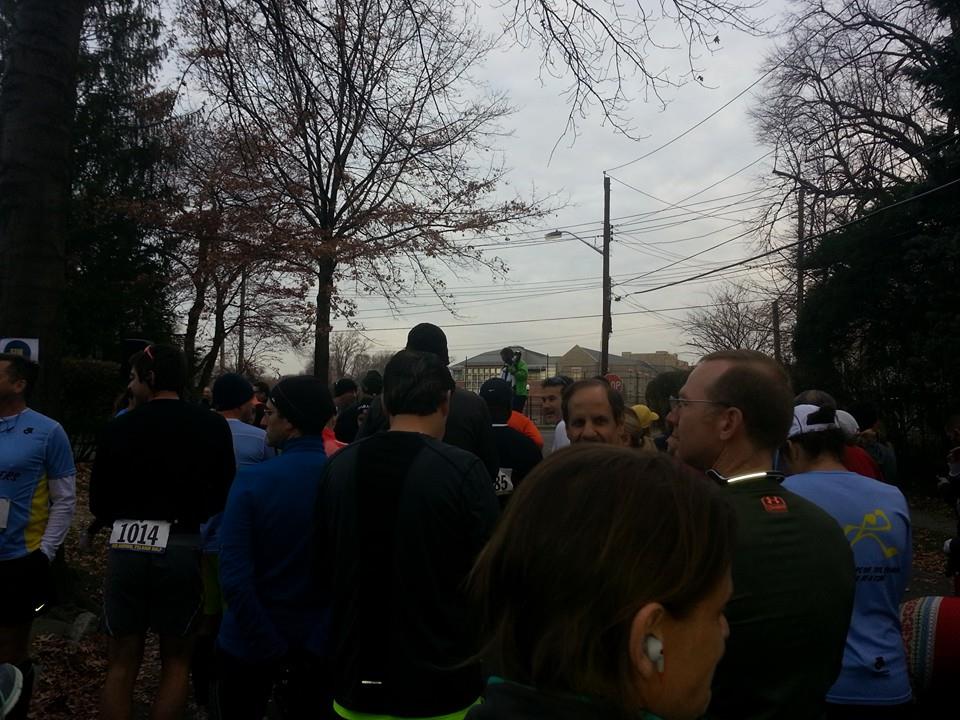 We did a lap around the track of Glover Field to get some mileage in. Pelham is a teeny tiny town and it really does take some creativity to rack up mileage. Note the soccer game going on.  I have to wonder what those players thought of a bunch of runners in race bibs doing a lap around them and then running off. 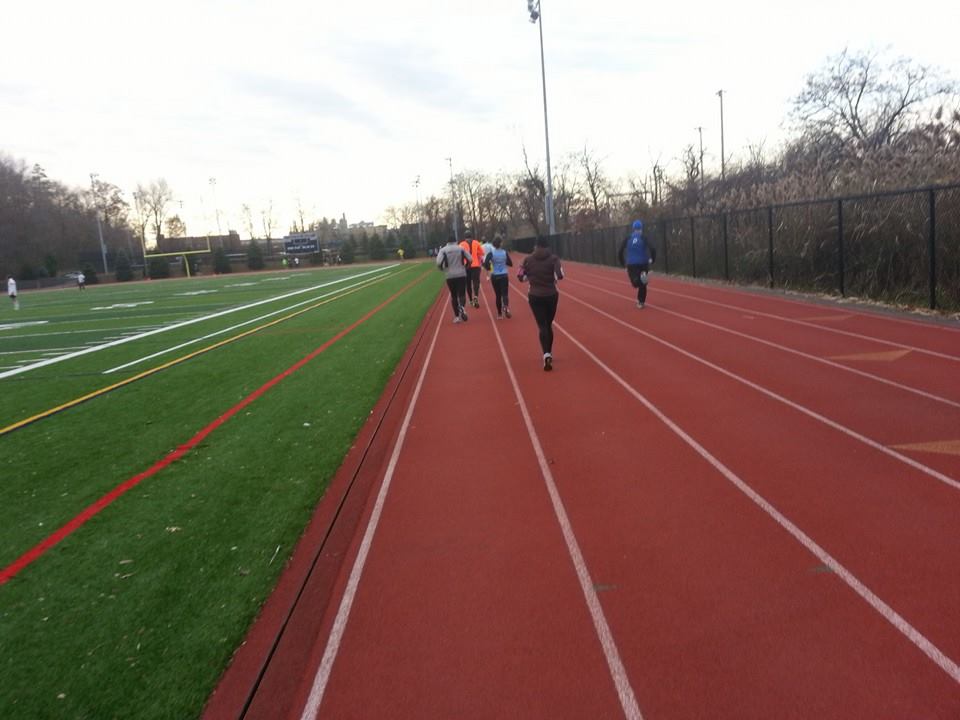 We ran through on a trail in Shore Park. Wonderful place to run! I’d never been there before. 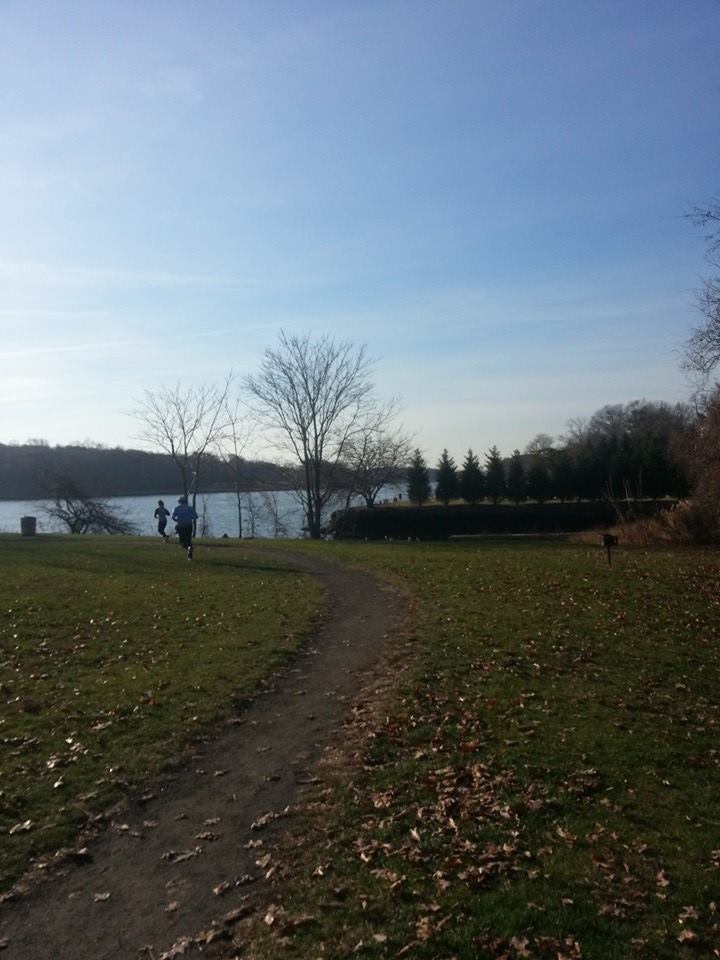 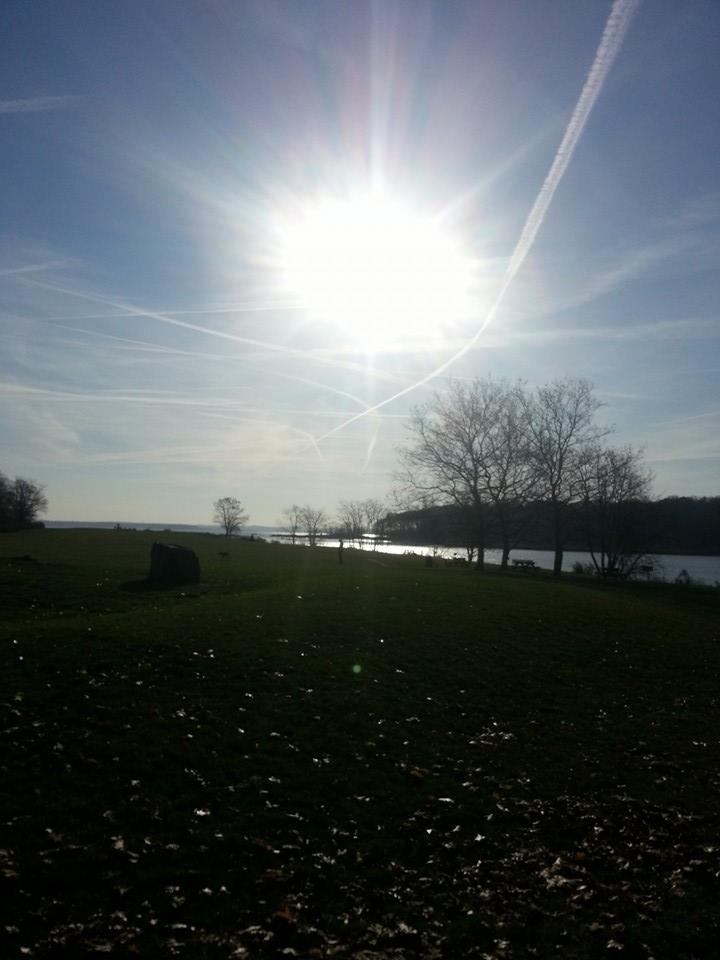 We ran through a hidden footpath. I have to give credit to the organizers not only for finding enough miles to run a half on but also finding scenic and varying routes. It wasn’t the same old scenery for 13.1 like a lot of halfs are. And even with the roads not being closed there weren’t many times I had to stop for traffic because the route was planned to avoid busy areas. 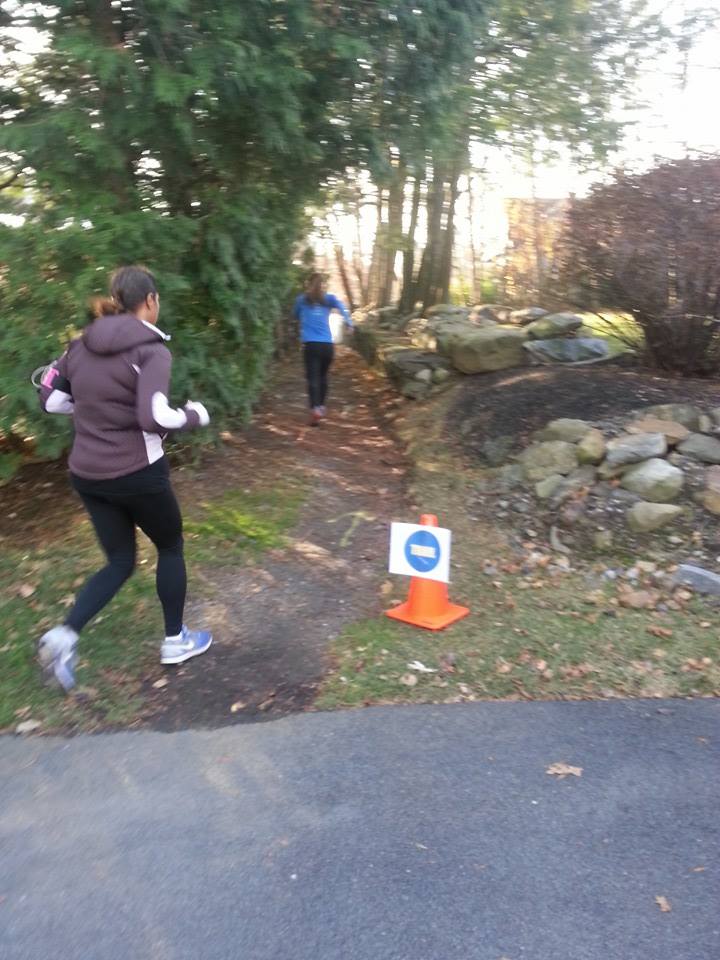 So the e-mail warned of a few “major a** hills.”  The week before I was chatting with a coworker and mentioned I wished there was a way to convert elevation to treadmill incline so I could prepare for the worst of it.  He said he’d bust out his red marker and white board and after some calculating figured if I ran for around 6 minutes at 2% incline on the treadmill that would replicate the worst of the hills. Not even close buddy. Look at this hill. It looked like cars were falling out of the sky when they came over the hill. That is how steep these things were. 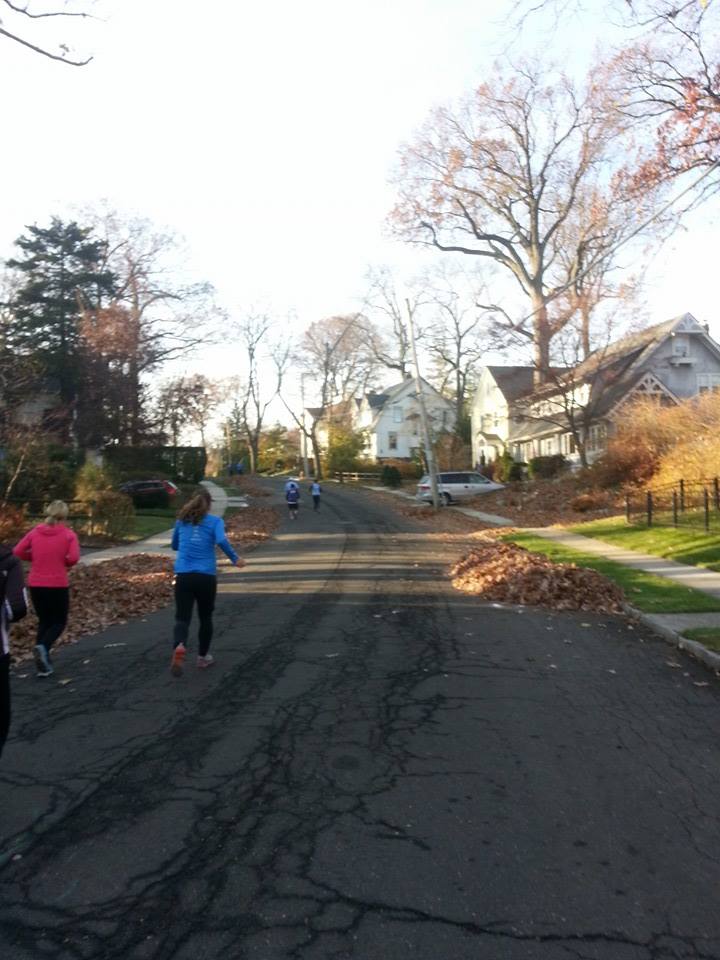 Spectator wise there weren’t many.  There were plenty of aid stations along the way and one or two parents with their kids out. And a guy who’d written a race sign on the back of his political campaign sign and flipped it back and forth. If I remembered his name I would probably vote for him just because he was the only politician out there rooting us on.

On the way I saw one group of runners go the wrong direction. Looked like they were following markers for the 6 mile route instead of the half route. I followed a pack that seemed confident about the way they were going and that was a good choice. Funny story though about someone else who was getting confused.  She mentioned that if it weren’t so cloudy maybe we could use the location of the sun to figure out which way to go. If I ever go trail running I’m following her.

Eventually I fell behind most of other runners.  I was feeling good though.  Especially with no training and those hills.  I got to the marker that said mile 13. And….I got lost. That’s right. I got lost at mile 13.

Mile 13 was round a median on a street called Esplanade. I saw chalk arrows that pointed to go round it. And I did. Twice. You know those movie scenes where people go round and round in the revolving doors? That was me running round that median.  I was thinking man this mile 13 sure is taking a long time. Then I checked MapMyRun and saw I’d done 15.6 miles. Running a half marathon with no training is a little out there but running a full with no training is certifiably insane. So I decided to call it quits especially since I had a mile to walk home. I checked one last time to see if I saw arrows that said “this way to finish” or anything like that and didn’t.  I walked home twerked that I’d run a half but was going to DNF because I got lost. At mile 13. Who does that? I do. Again, if I’d picked up that cue sheet this story might have been different.

Later that day an email from the organizer went out mentioning that a lot of people forgot to list their finish times and he asked for everyone to reply back with the time they thought they finished (no chips in the bibs, but there was a clock at the start/finish line.) I replied back with the MapMyRun record to show I’d run 13.1 but it wasn’t exactly the same route everyone else ran and asked if it was possible to list the MapMyRun finish time for 13.1 which was 2:17:17. He said because it was an unofficial race and because I had the MapMyRun record he would not list me as DNF! Usually I’m in a race for the hardware at the end but at that point I realized all I really wanted was to be able to say “Finisher. 2:17:17.”  I appreciated it very much. So much in fact that I decided I will be back next year to kick the Pelham Half’s hilly confusing a**.  I’ll just be kicking it’s a** with the cue sheet in hand.